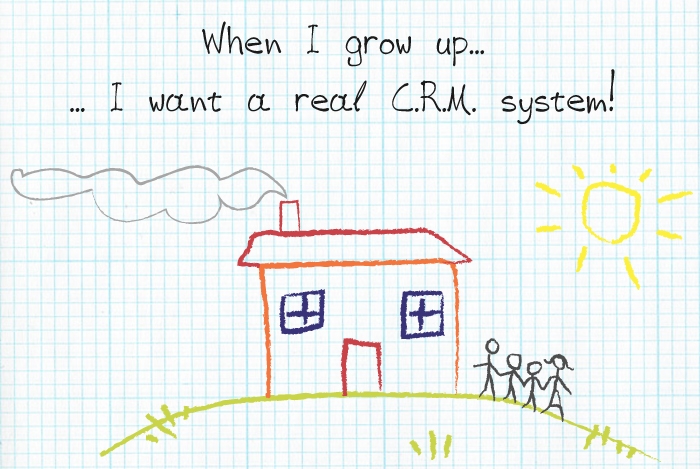 Growing a business isn’t easy, why make the transition any harder with a CRM system that won’t grow with you. I was babysitting my nephew for most of the day Saturday. He’s 11 and will freely acknowledge that he’s in that “awkward age” where he’s not really a kid anymore, but also not quite a teenager. Saying that, you do get glimpses of both from time to time…with the teenager side rearing its head more and more often.

I remember being that age and finding it very frustrating. On one hand, I wanted to still be a kid and would try to play the same games with my friends as we had done for so many years before, but none of us really found them as fun as we had just the previous year.

But at the same time, I didn’t enjoy sitting around listening to Nirvana quite as much as my older sister and her friends did…or at least not for the same lengths of time.

It was exceedingly frustrating not really being one thing or the other.

It’s very similar to the frustration I’ve heard from people who’ve tried to use free CRM systems. The systems aren’t bad, but they’re not really one thing or the other. They don’t have all the features of a fully-fledged CRM system, even if they do offer slightly more than a spreadsheet.

It’s very tempting to use one of these systems if you’re thinking about moving out of your spreadsheets and into CRM. They seem to offer most of what you need and are better than what you’re using now. But in reality, you probably won’t be able to use them for very long and will likely end up finding it necessary to make the transition to a full CRM system.

It can be a big step to take from spreadsheets to CRM and I sympathise with people who aren’t quite ready to commit to CRM. But at the end of the day, it’s better to find a system that you and your company can grow with instead of picking some more transitory system that you’ll eventually grow out of anyway.

It would be like choosing to remain in that awkward transitory not-a-kid-but-not-a-teenager stage my nephew is in and, really, who’d want to go through all of that again?

Although I originally hail from northern California, as soon as I arrived in Yorkshire I knew it was the place for me! At OpenCRM, I started out in the Business Development team, and then moved into compliance and Q&A because I love telling people what to do...ok, that's not the real reason, but it makes for a good bio one-liner. When I’m not in the office, you can usually find me tramping through the dales, crafting, gardening, or with my nose in a book.
Back to Blog